One of the things Kid Can Doodle likes to feature is alternative coloring books that have become popular over the past decade. The first is a recent release from graphic design and illustration pioneer Seymour Chwast and art director/book designer Carol Chu entitled Shoes, Shoes, Shoes: A Delightful Book of Imaginary Footwear for Coloring, Decorating, and Dreaming.

While Mr Chwast isn’t known for fashion design, the book showcases his whimsical and witty way with pictures, and now, for fancy footwear. The pair had previously collaborated while Ms Chu was an employee of Pushpin Studios, the famed studio he co-founded with Milton Glaser (another design legend), Reynold Ruffins, and Edward Sorrel. As you can see below, his drawings are coupled with fashionable quotes, such as Marilyn Monroe’s: “Give a girl the right shoes, and she can conquer the world.”

Ms Chu’s previous book (co-authored with Lulu Chang) is The Fashion Coloring Book, which she also illustrated. She currently designs children’s books for Houghton Mifflin Harcourt and is profiled by Gordon Dummond at Notes on Design, where you can read about her work and process. 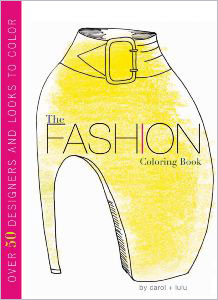