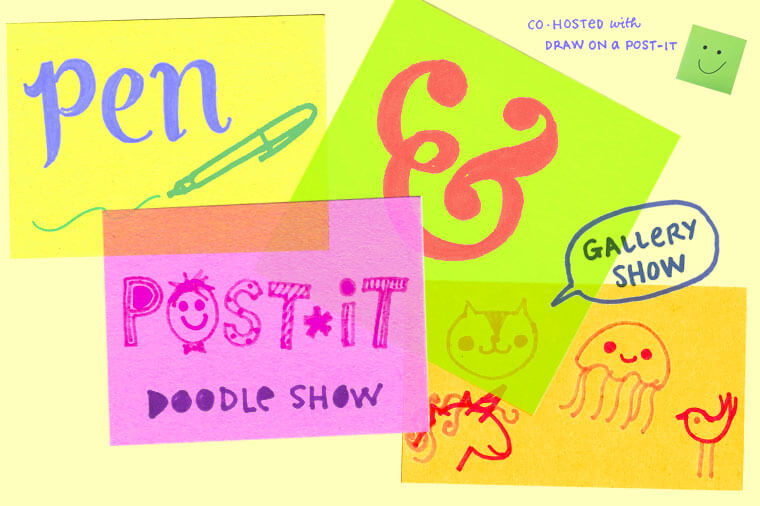 Pen & Post-It Doodle Show is a tribute to my son’s favorite thing to draw on. The ubiquitous mini yellow notepads, accidentally invented by 3M with a low-tack adhesive strip, are a popular paper choice for doodlers. For years, I would collect little booklets my son had made, like these doodling manuals . . .

How to Draw Cool Stuff by Little Dude 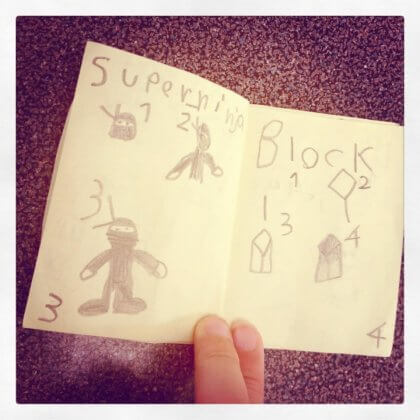 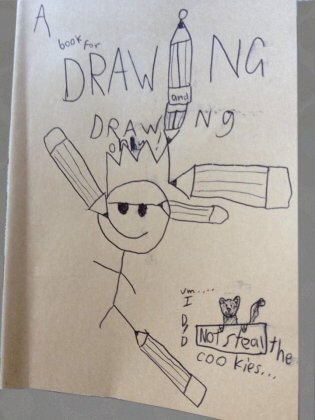 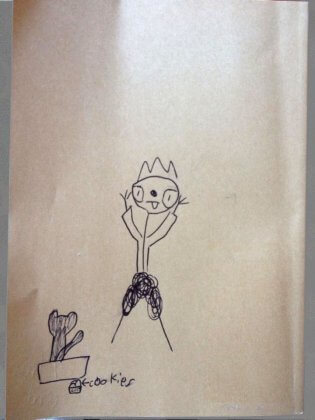 A book for Drawing and Drawing only!

The idea to feature the famous sticky note in a doodle show came when I discovered artists sharing their doodles on @drawonapostit on twitter. I even asked the owner — Ben Law Smith — if he’d co-host a doodle show with us, and he agreed.

Post-It Notes are perfect for doodles because they are small (less scary to fill a big blank page), are relatively cheap, and found in stationers and supermarkets. They take to media a bit better than napkins, which can be too absorbent for markers or soft for pencils.

Just because they are inexpensive doesn’t mean that every Post-It doodle is a “throwaway.” Proof that they are an underrated canvas can be seen at the annual Post-It Show at Giant Robot’s GR2 gallery in Los Angeles. Hundreds of artists around the world contribute to the popular show where fine art can be had for $25 per Post-It.

This year many of our entries came through social media, on instagram and twitter. We want to thank everyone who participated and played along. Cheers to our online doodle community!

Happy Doodling in 2018! Cheers from Kid Can Doodle!

The Post-It Note Show has been a Giant Robot tradition for 13 years now at their GR2 Gallery on Sawtelle Boulevard in Los Angeles. Every December, artists from around the globe contribute mini works of art that can be purchased for a mere $25/post-it note. Artists who have participated in the past have included The Simpsons’ creator Matt Groening, Audrey Kawasaki, Renee French, and Joey Chou. The Post-It Note Show was conceived and curated by artists (and husband and wife team) Mark Todd and Esther Pearl Watson.

Giant Robot is a brand that also includes a magazine about Asian-American pop culture, and a store selling items from comics to plush toys. The owner Erik Nakamura says:

“Just because it’s a Post-it doesn’t mean the work is lower quality.”

In fact, every year artists try to exceed the gallery attendees’ expectations by using paint, pencils, pen, and scissors. Two artists who have used shears in their work this year are Chris Lyles and Bryan Park. Nakamura believes the humble Post-It Note makes the show accessible to a wide audience. The sticky notepad is available at any supermarket and stationery store, and can be doodled on by everyone (hint hint. . . even you!). There are no frames at the show, and the low sticker price enables collectors of all ages and backgrounds to grab a favorite piece or two.

As you can see below, the work is as varied as the artists who created them.

Some post its for #postitshow @giantrobot . I’ve been liking cut paper lately !

Do you feel inspired to doodle on Post-It Notes now? We hope so! At Kid Can Doodle, we’re having our own Post-It Note Show. Grab a pad and draw some fabulous entries for Pen & Post-It doodle show. Just share your doodles by tagging #penandpostit on social media (deadline is December 31, 2017). Hope to see your doodles!