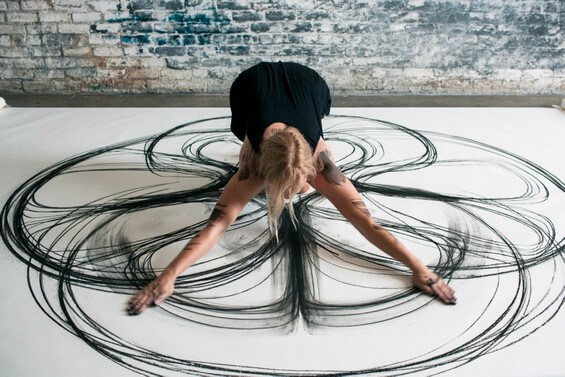 Have you ever seen a live drawing performance?

Until a few weeks ago, the closest I got was watching a caricaturized roomba draw at David Shrigley’s Life and Life Drawing show at the National Gallery of Victoria last year. Then I attended Drawing International Brisbane (DIB) Symposium at the Queensland College of Art at Griffith University (where one can actually obtain a Drawing degree). In addition to the lectures, we were treated to several exhibition openings, including my first live performance art show: under arena.

The show was a collective of live drawings in one of the city’s historical buildings, a former reservoir next to the heritage-listed Old Windmill. When we walked down the metal steps into the dimly-lit, cavernous brick space, the first artist we found was wrapped in a sari-like gown that glowed in the dark. She was standing barefoot on a round mirror filled with water, and painting on the wall with a large tassel. Sometimes she dipped the tassel brush into the water and flung it onto the wall, à la Jackson Pollock. Later, this artist — Velvet Pesu — treated us to an operatic vocal performance too.

The reservoir had six rooms connected by arched entries. Three other performances were happening simultaneously. One room was covered by large paper draped over the doorways, so the audience watched as a drawing magically appeared on the wall “canvas,” drawn by an invisible artist (Bill Platz).

Opposite, Zoe Porter, dressed in furry garb, was drawing with images projected on the wall (below). Zoe Porter often explores the theme of Anthropomorphism (humans + animals) in her art, hence the costumes. 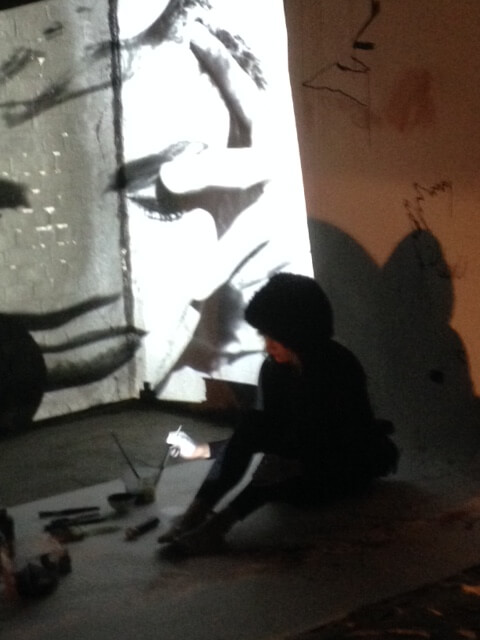 The last room revealed an experimental collaboration between visual artist Kellie O’Dempsey and sound artist Michael Dick, creating a layered projection of hand and digital drawing (below is an example of her work). 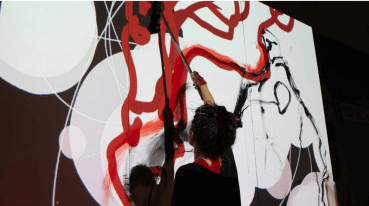 image via NUM3ER London from Drawn to Perform

According to Kellie O’Dempsey, drawing in public is the act of drawing in a specific time, space/location, shared with an audience. Seeing the drawing happen live allowed us to be a part of the creative experience.

With my limited images here, it’s hard to convey the theatricality of the drawing performances. I admit that some of the aspects seemed a bit “out there,” but my take-away was that sometimes it’s not about the end result.

We focus so much on the finished drawing, that we often forget that the magic of drawing is seeing it come to life.

Drawing, like poetry, is a form of expression, and there is a beauty in that; whether or not the end result resembles anything is beside the point.

Sometimes artists combine drawing with other forms of artistic expression: movement and music, creating more layers to their art. Heather Hansen (at top) and Tony Orrico, who is famous for his Spirograph-like drawings (below), are dancers too.

Watch Heather Hansen in this beautiful performance in Korea:

Flatline duo’s (choreographer Carl Sciberras and artist Todd Fullerlike) performances are a perfect example of the marriage of dance and drawing. For A Dance for Paul Klee 2015, Annabel Saeis wears crayon shoes (made by dunking shoes into melted wax) that trace her movements onto the paper. 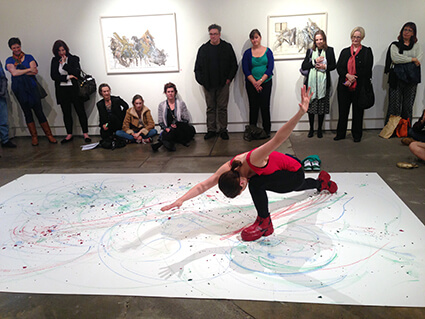 image courtesy of the artists via RealTime Arts Magazine

“If drawing is taking a line for a walk, here that line dares to dance.”

— A Dance for Paul Klee 2015, from the Drawn to Experience v2 show catalogue curated by Kellie O’Dempsey, QCA POP Gallery

Go outside on the sidewalk or basketball court. Lie or kneel on your tummy, grab a large chalk in one hand, and try to keep it on the ground as you spin your body around like Tony Orrico does above. OR tape some chalk onto the bottom of your shoe and glide on the pavement, as if you were ice skating. Repeat with different colors and have fun! Invite your friends or family to watch you!