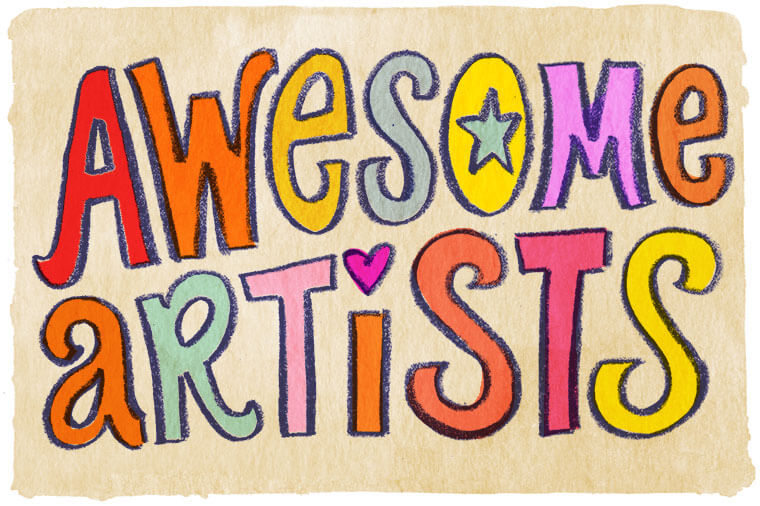 In this series, Awesome Artists, we talk to our favorite artists to find out their techniques, learn how they do things, and get their tips for creating. We spoke to Kirsten Ulve to get pointers on sketching people, and Allison Langton, who shared her process on painting plants in watercolor. Today we get a peek into the mind of Richard Jones, via his sketchbook for The Snow Lion (a collaboration with Jim Helmore for Simon & Schuster Children’s Books). Richard shows us how he created the characters for this special book. 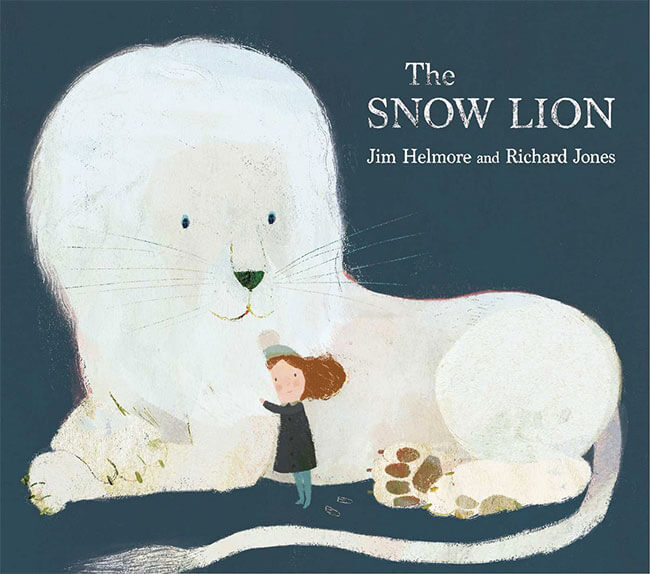 I confess — I’ve been admiring Richard Jones’ work for awhile now. What he does with paint and color is pure magic. I’m so jazzed we get to share his work with you! I think you’ll adore it too.

KCD: Hi Richard. Thanks for being one of our Awesome Artists! Can you share with us how the character of Caro came to life? Were there influences in her formation?

RJ: I began sketching ideas out in my sketchbooks first. My first character sketches of Caro were quite different from how she eventually appears. Most of my original character sketches had her being a little older and rendered a bit more realistically. I think it was Jane, my art director at Simon & Schuster who suggested that Caro might loosen up a little and I’m so glad she did! 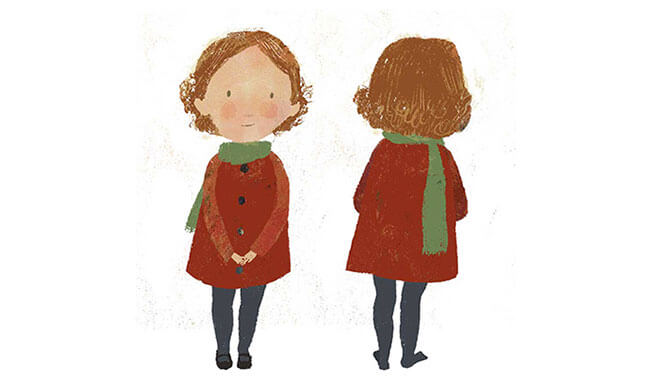 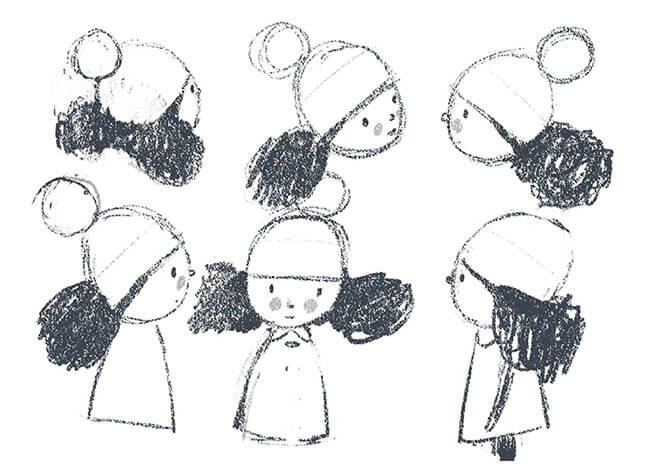 Once I found her character, things fell into place and she was a joy to draw. In terms of her appearance, Caro is a combination of the two girls that help me at the very beginning when I needed someone to pose for me! (I dedicated the book to them!) 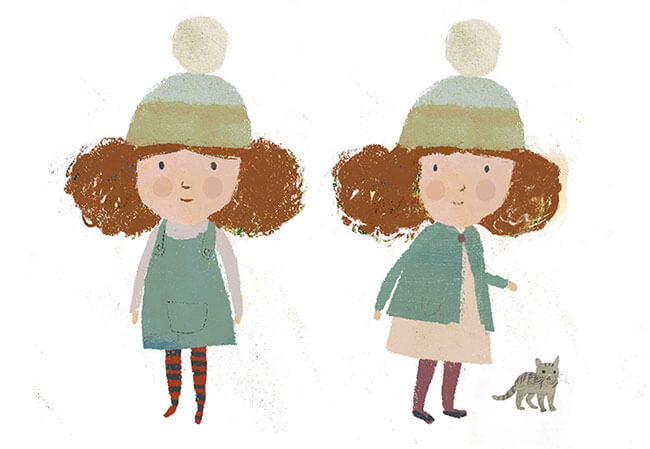 Her clothes did take a little time to get right. I liked the idea that even inside her new home she was often buttoned up in a large and warm, protective coat. When she’s having the most fun with the lion her clothes are a little more colourful and jolly!

Note how Richard plays around with the character’s age and hair. The clothes and big hair make her younger.

RJ: Caro’s friend Bobby and his dog evolved from my sketchbooks in a similar way… 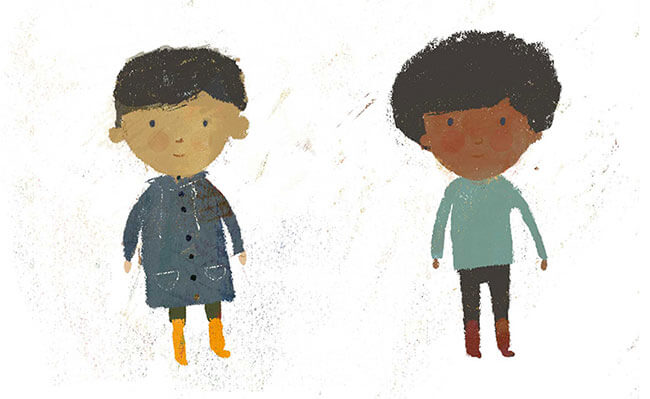 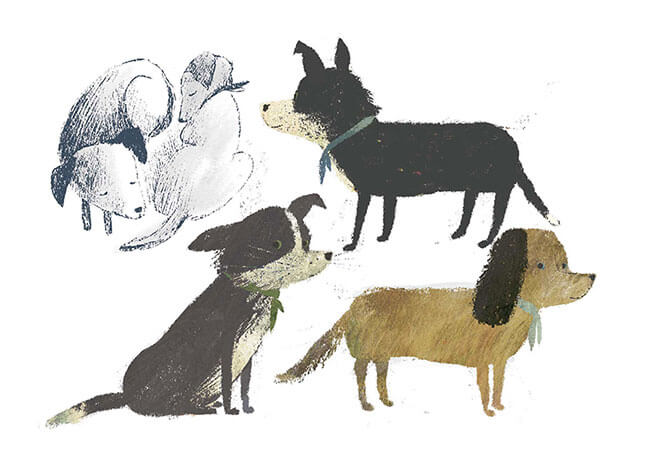 Draw a girl or boy and try different hairstyles and clothes on them. See how you can change their age or personality by changing what they wear.

KCD: What was most challenging about creating the title character The Snow Lion?

RJ: The Snow Lion took many, many pages of sketchbook scribbling before I was satisfied I had found his character. It was clear early on, however, that his and Caro’s relative sizes would be important to how we understood their relationship — too big and he seemed overbearing, while when he was much smaller he seemed to lack the qualities of comfort and support he needed to offer her.

KCD: The lion is so plush and comforting; I think that adds to the sweetness and feeling of the story. There’s something about how you convey that connection — I can see a child wanting that protection and bond too. Did you have inspiration for that?

RJ: Again, it was Jane that had a big influence here. She kept saying ‘softer, softer, softer!’. Surprisingly that wasn’t as off-putting as it sounds…. As we were beginning work on The Snow Lion I was finishing off another story in which I’d painted a snow shoe hare against a blue background. It’s my favourite page in that book and his white, fluffy fur definitely influenced how I began to create Caro’s lion.

I was conscious that there was a potential for the whiteness of his coat to seem cold and perhaps a little sterile, especially against some of the white walls in the early spreads, so I took my time warming him up a little with lots of water colour washes and gentle textures. Jim [Helmore]’s choice of a lion for her companion is just the perfect. He’s the ideal animal for the role — Caro can hide behind his huge body when she’s feeling unsure, or sink into the comfort of his soft mane when she wants a cuddle!

Although his scale may shift fractionally through the spreads to suit the circumstances, his warm fur and soft mane is always available when she needs him!

A very early character sample. The painterly quality of his fur made it into the final book though his bushy mane grew in stature! 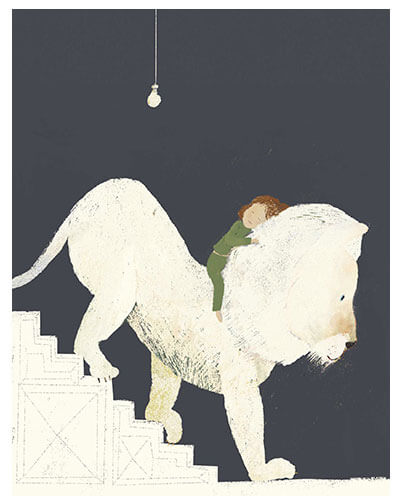 It was a real honor to work with such a beautiful and sensitive tale. It’s a story that I hope will resonate with all little ones who are struggling with change of one kind or another. The Snow Lion reassures both Caro and the reader alike that loneliness and sadness are natural but never last forever.

See how Richard makes the character Caro feel safe and secure with The Snow Lion, rather than frightened or scared?

Richard Jones is an illustrator based in Devon, England. He also illustrated Town Mouse, County Mouse and Feelings for Little Tiger Press.

Try sketching a character from one of your favorite stories. Consider how you could change him or her by changing the way they look. For instance, what if Goldilocks didn’t have blonde hair. Or what if Pippi Longstocking was a boy instead? Consider how changing their hair or clothes can really change the story or how we feel about the character.

All images are courtesy of Richard Jones and copyright of the artist.