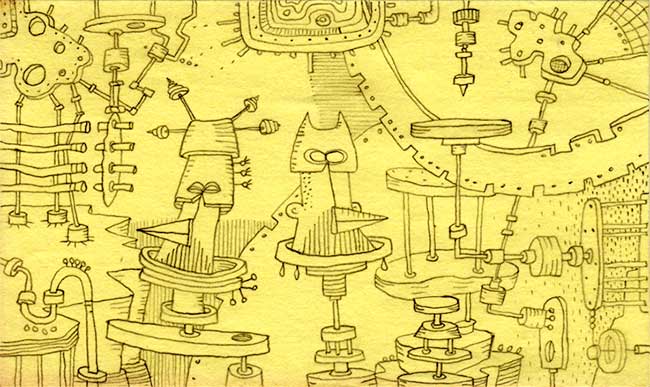 I’m really excited to introduce you to the Land of Spike Gerrell. Spike Gerrell is an illustrator based in London whose imaginative work leaves me very curious. When I see his quirky characters in these fantastical scenes, I feel like I’ve glimpsed inside the mind of a creative genius. 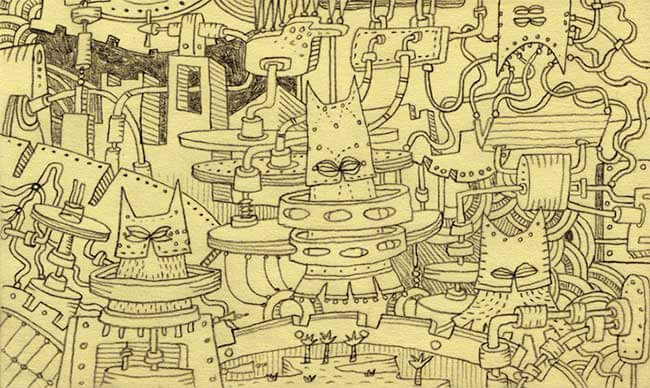 Last year, we inspired Spike to doodle on Post-It Notes with our own kid can doodle Pen & Post-It Doodle Show. Spike’s Post-It doodles have turned into a series, and soon an exhibit in Hertford, England. 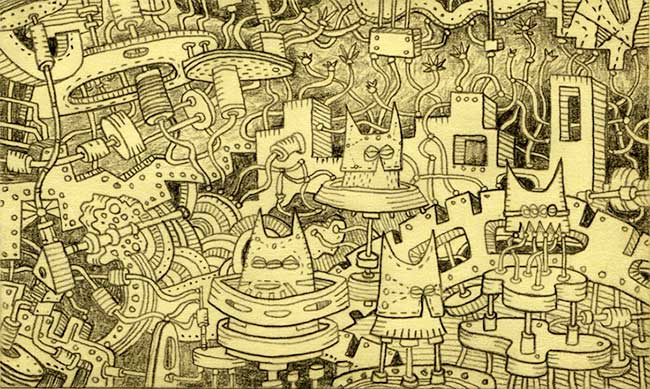 Spike is giving us a sneak-peak of the Post-It series. The scenes here are in chronological order — Can see the story being told? How many characters can you spot? What are they up to? 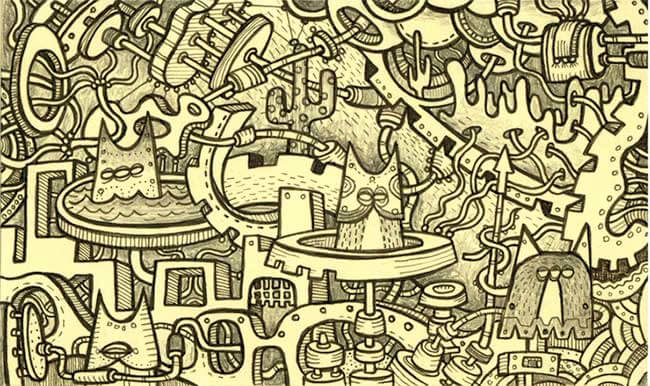 Spike admits, “There are certainly recurring themes in my work. There’s no deliberate decision to work how I do; it just seems to happen like that.” 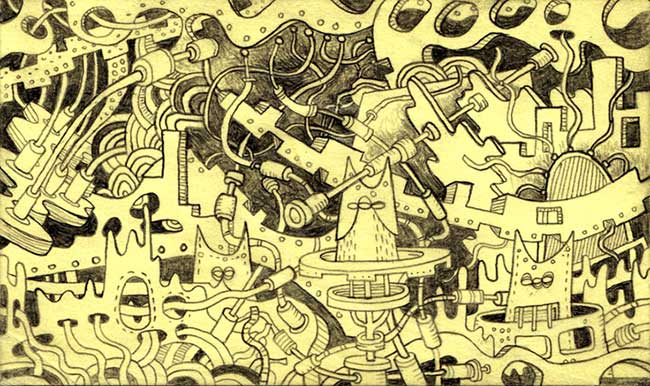 “My style has developed over a long time period, but I’m pretty much now doing for a job what I did as a kid when I was at school.” 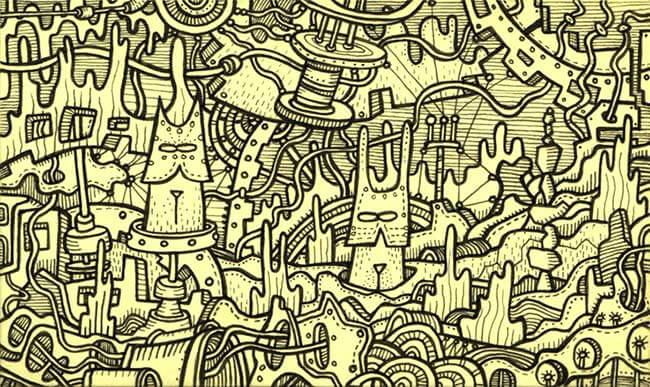 “The characters have simply evolved to be part of the language I use to effectively portray whatever idea I need to get across. They can morph and adapt depending on audience and what I need them to say.” 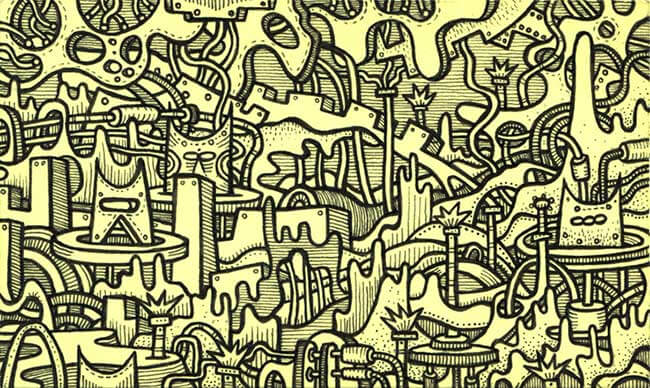 The show will be at Hertford Theatre Gallery next year. There will be originals and prints of the Post-It Note designs along with larger paintings which have evolved from the Post-Its. 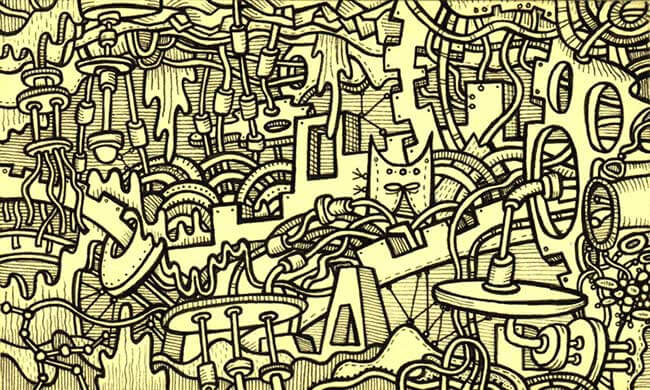 “The universal appeal of Post-Its is deliberately anti-elitist and lo-tech. It dovetails nicely with my maxim that art is for everyone and that the possibility of making art is everywhere and all around us.” 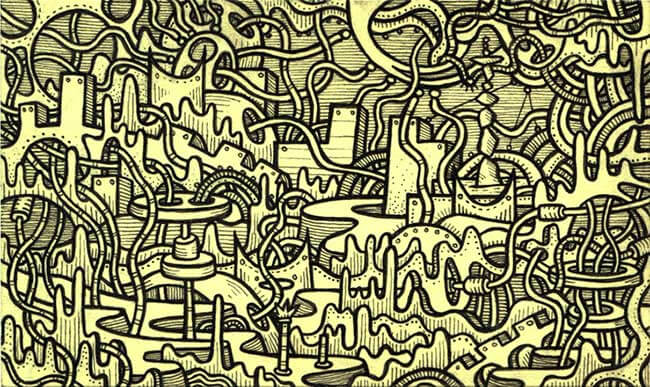 “The plan is to have an interactive section in the gallery with Post-It Notes available for visitors to make their own art. They will be curated and displayed alongside the regular exhibit.” (That means that we can our own doodles to the show too!) 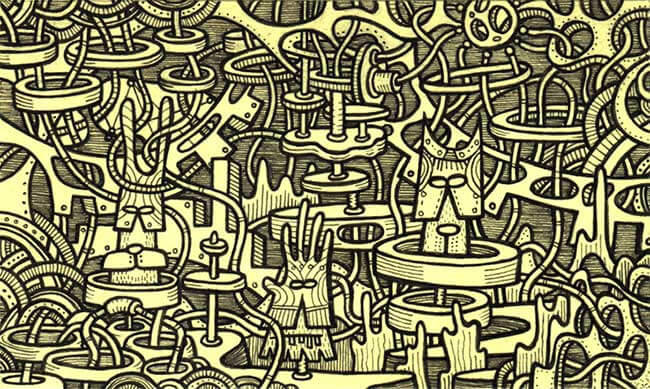 The intricate detail of Spike’s doodles defies its modest medium. 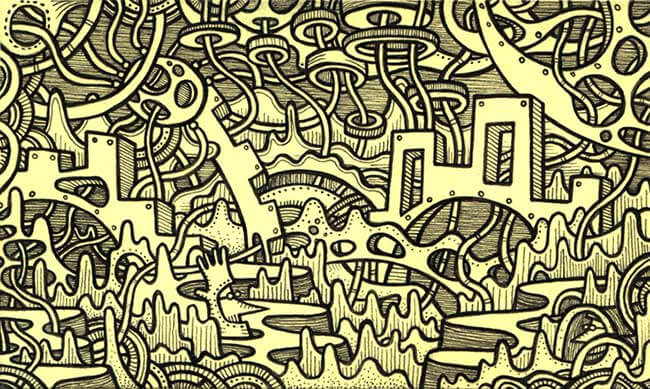 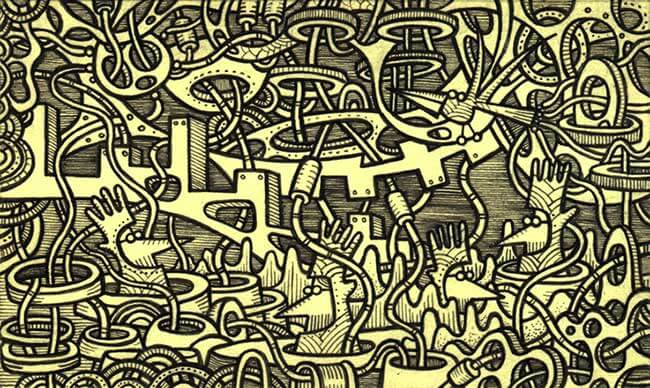 See more of Land of Spike here. Follow his escapades on twitter or instagram. Look for Spike’s Post-It Show at Hertford Theatre Gallery (scheduled and curated by Courtyard Arts) in March/April 2019.

All artwork courtesy and copyright of Spike Gerrell.