Our first show featuring portraiture is one of my favorites. We looked at self-portraits from the masters, and had some great guests (Justin Garnsworthy, Charlotte Love, Bill Sullivan, Kirsten Ulve) who showed us how they do faces. I hope you found How to Draw Your Face and 5 Ways to Draw a Selfie helpful, and enjoyed seeing the Museum of Selfies.

I love seeing everyone’s take on themselves, and just wanted to give a shout out to a couple of entries that featured different media or techniques: Colette’s use of collage, Dylan’s “Minecraft” pixel portrait, and Elena’s window drawing. I also adored Cameron’s expression, and seeing Henry’s haunting(?) eyes. Thanks to all who took the time to enter! We [heart] you!

I recently saw this clever tumblr blog that I had to share because it’s so relevant to our current theme: self-portraits. I’ve been calling our drawn portraits “selfies,” but that term, of course, refers to taking a photo of oneself (or a group) with a smart phone. Olivia Muus, an advertising art director at agency Seligemig (who coincidentally has a great collage of portraits on their homepage) created this Museum of Selfies that combines the two references: the phone selfie and the artist self-portrait in the most unexpected way—it’s brilliant! Take a look: 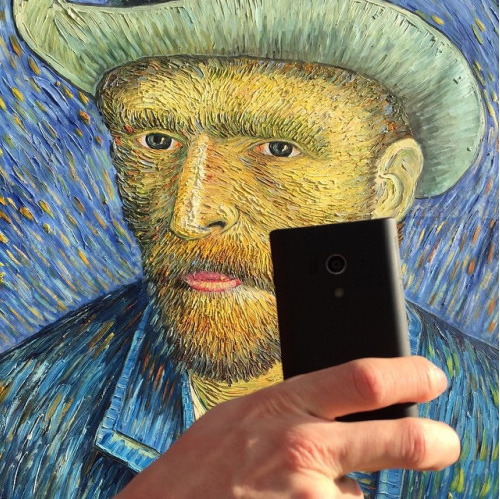 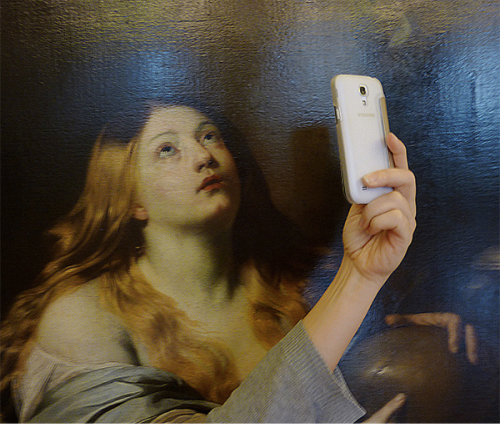 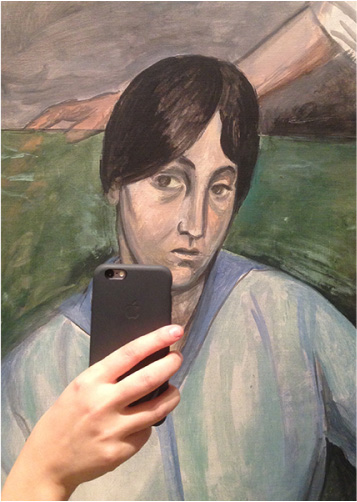 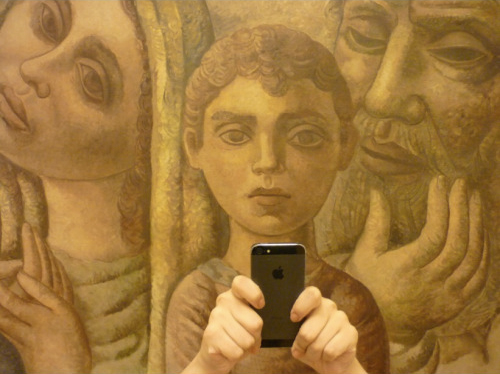 taken by Lucas Strabko. Lasar Segall, “Emigrantes,” at the Pinacoteca in São Paulo 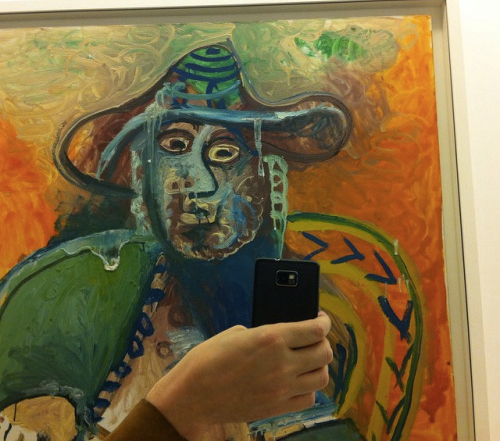 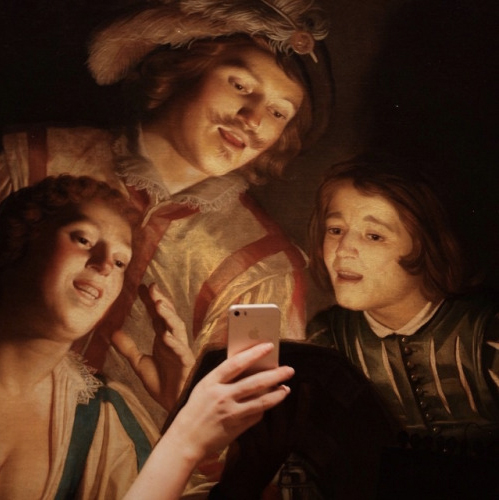 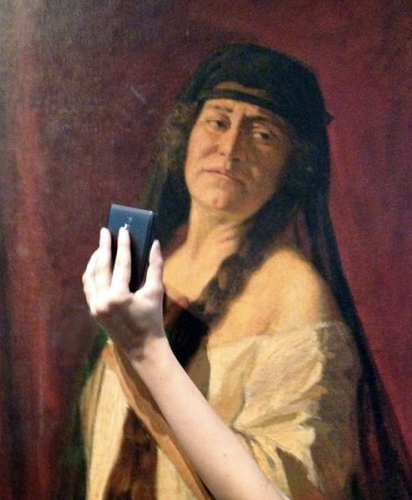 I love how the photographer and subject seem to blend, and the painting comes to life—they really do appear to be taking selfies! This amusing blog is curated by Olivia Muus, but some of the images were taken by contributors. Please note: The artist and title of the work are only indicated when such information was provided by the blog.

Images via Museum of Selfies

Here’s a step-by-step tutorial with tips for drawing your face. Before you begin, you will need: 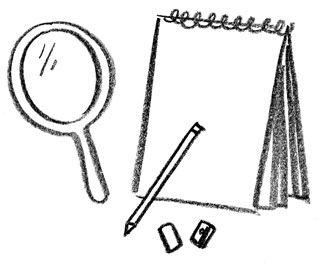 Start by looking at your face (in the mirror or at a photo of yourself) and studying your features. 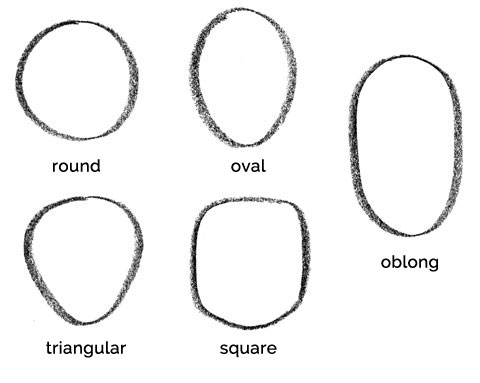 Sketch the structure of your face:

Draw in the features: 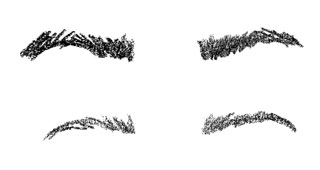 I hope these tips help you in your drawing. Let me know if you have any questions by replying below. 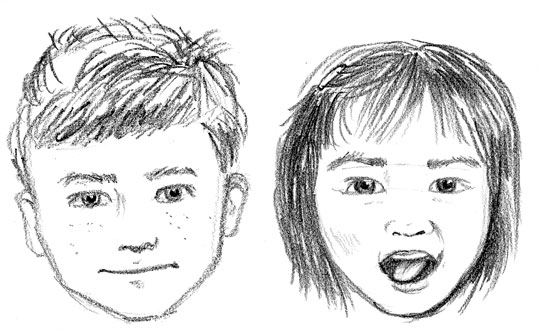 When trying to create your portrait, think of what makes you distinctive, or what makes you look different from anyone else. What’s your hair-color and hairstyle? If you always wear your hair in pigtails, then you’d definitely want to show your hair up, instead of down. What color are your eyes? Do you wear glasses? Is there a favorite hat or dress that you always wear? Maybe you’re known for wearing a bow in your hair, or red boots. If someone saw you down the street, how would they know it was you? If you were a character in a book or tv show—who wears the same thing all the time—what would you wear? Also, consider adding details such as your home, or pet or beloved things (sports equipment, toys, etc.) that are special to you and help tell the viewer about you.

Just in case you need some inspiration, here are 5 ideas for creating your self-portrait:

1. Make a Mirror-Image. Sit in front of a mirror, as Norman Rockwell did, and render your reflection.

2. Dupe the Other Half. Print out or photocopy a snapshot of yourself, fold in half, place onto another piece of paper, and draw the other half. Like Jimmy the cat did here: 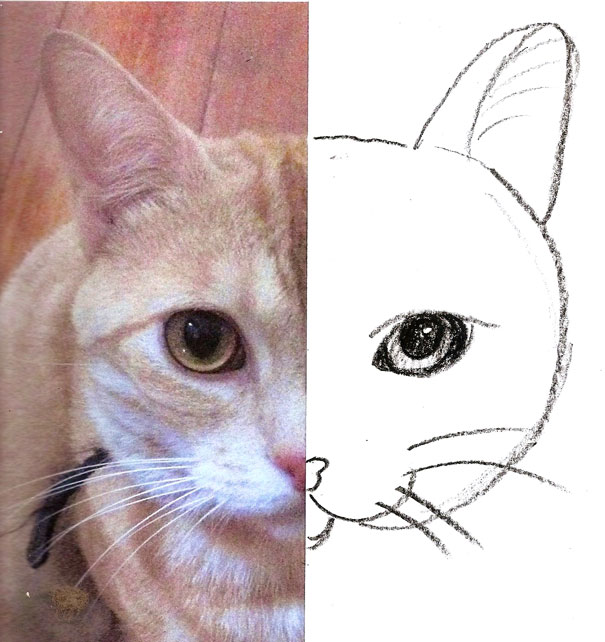 3. Pretend to be Picasso’s Muse. Take a look at a few of Picasso’s portraits below: {from left to right: Portrait of Dora Maar, 1937; Girl Before a Mirror, 1932; Seated Woman (Marie-Thérèse Walter), 1937}, and try your hand at Cubism, a style of art that the artist made famous.

Take note of the way he seems to combine both frontal and side views of a face. Here’s Jimmy’s interpretation: 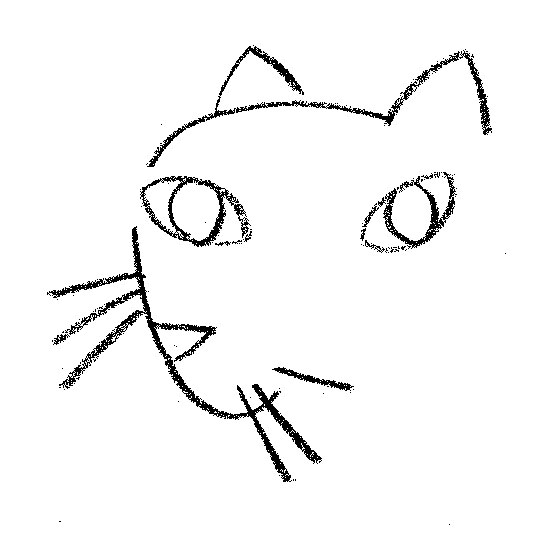 4. Make a Minecraft Mosaic. Take some grid paper, and sketch your hair, eyes, and mouth, using only the squares as a guide. Then fill in with color. This is a good exercise in reducing details to simple shapes.

Variation: If you want to try a more detailed version, take a look at this Self-Portrait by Chuck Close: 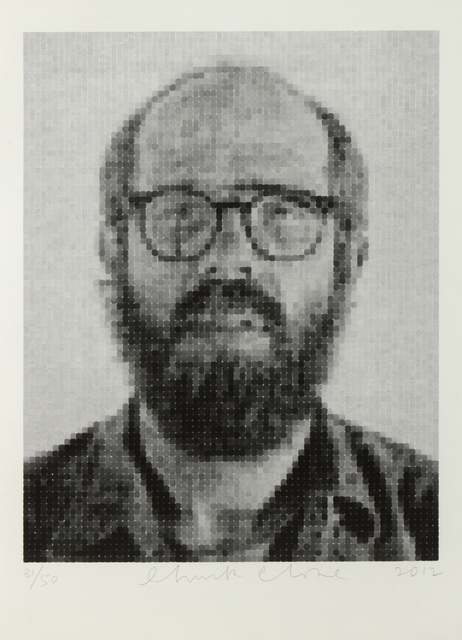 5. Cartoonize Yourself. You don’t need a Simpsons Avatar Generator to create your own cartoon character. Take note of their distinctive details as you’re drawing:

The round eyes. Add eyelashes if you’re a girl. Note: If you wear glasses, draw the glasses and then add the dots for iris, so the glasses are combined with the eyeballs.

Other features such as the nose, mouth (with an exaggeratedly pronounced upper lip), and ears look like this:

And don’t forget to add that trademark bright yellow. 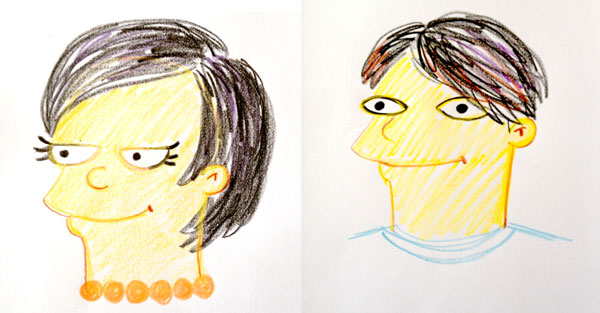 Variation: Inspired by this Buzzfeed post, I created a Power Puff Girls version of myself: 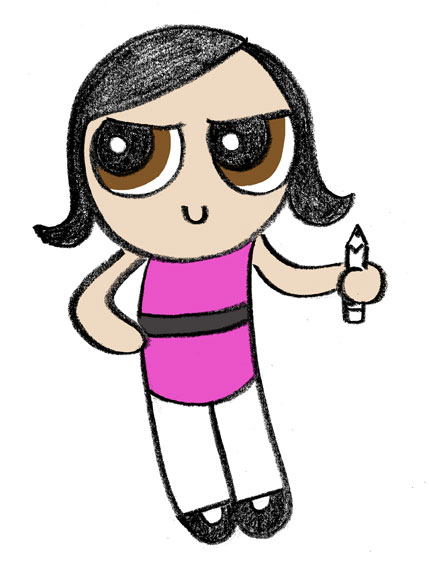 Don’t forget to check out these 10 Famous Faces for more inspiration and How to Draw Your Face for rendering tips. Then enter your self-portrait in our Selfies show.

While self-portraiture can be traced back to ancient Greeks, Ian Chilvers explains in The Artist Revealed: Artists and Their Self-Portraits that there are 3 main reasons why we don’t see many examples until the Renaissance era (1300-1700) and thereafter:

To give context to our current KCD Call for Entries, Selfies, here’s 10 of the most famous artists’ self-portraits. 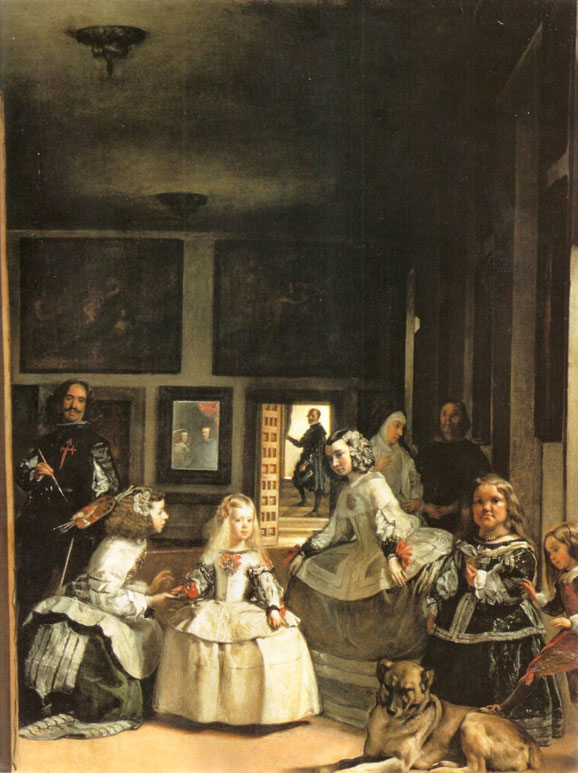 One of the most well-known self-portraits in art history shows the artist on the left, holding a brush in his right hand. What’s interesting to note is that while the mirror reflects the opposite of what is true, many artists will correct the reversal, so that Veláquez is most likely right-handed as depicted. What’s not clear is what he’s painting on the large canvas in front of him: Do you think it’s the blonde princess Margarita and her attendants (hence the title), or her parents, whose faces are reflected in the mirror near the background of the painting? 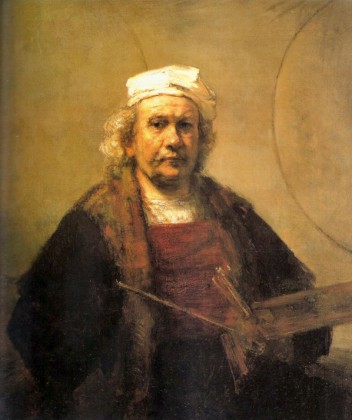 Regarded as one of the greatest artists of all time, Rembrandt, like Beyoncé, is known by his first name. I’ve always thought his paintings to be dark in palette, but he is actually a master of lighting. This painting is a perfect example: his command of the medium matches his assured gaze. 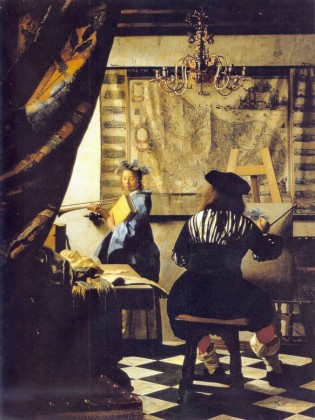 It’s so surprising to see the artist turning his back to the viewer—so defiant—I love it; I wanted to show that self-portraits don’t always depict an author’s face. Vermeer’s attention to details, seen in the map, or the chandelier, makes the painting look realistic, but his model resembling Clio (the muse of history), and his fanciful costume suggest that what we see is staged rather than a true snapshot of his life. 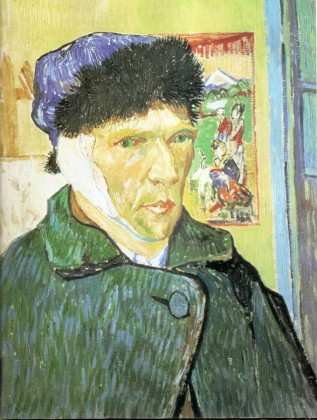 Evidence of a famous story in which the artist cut his ear after a dispute with his friend, artist Paul Gaugin. It also reveals that Van Gogh didn’t correct the mirror-image he was copying, because he had nipped his LEFT ear—not his right, as seen here. (Side note: Van Gogh has always been a personal favorite of mine; maybe the tortured artist appeals?) 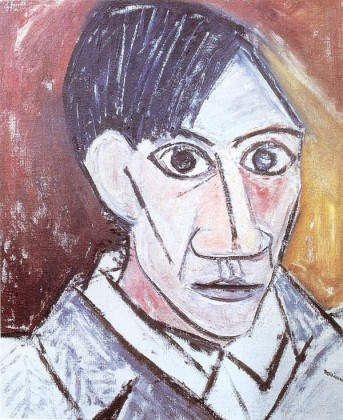 While this portrait isn’t as abstract as Picasso’s later Cubist works, it does hint at his progression in that direction. It also illustrates my suggestion to emphasize one’s own distinctive characteristics when creating your own portrait for Selfies. 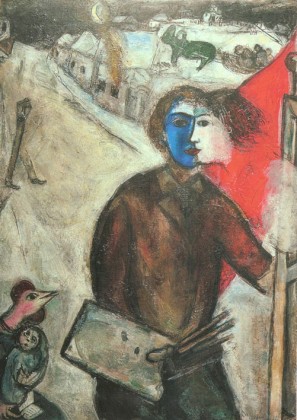 Chagall’s work is a example of how the inclusion of highly personal details can be more telling than a life-like rendered visage. For instance, we can conclude that his wife is important to him by the way he joins her face with his, combining their features into one. 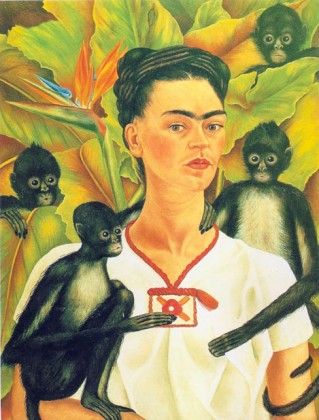 Kahlo’s love of animals is evident in her painting. She had many furry/feathered friends, including dogs, parrots, deer and monkeys. (Frida Kahlo is coming to The New York Botanical Gardens in Queens this year, May 16 – Nov 1, 2015. NOTE: I wanted to represent more female artists on this list, but in my research, there weren’t many to choose from, and among those, Frida Kahlo seemed the most familiar.) 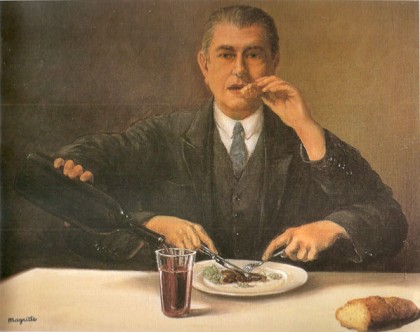 Magritte, was a surrealist famous for playing with reality and illusion—often with a bit of humor—and this portrait is a perfect example of that. We don’t have to take ourselves too seriously, right? 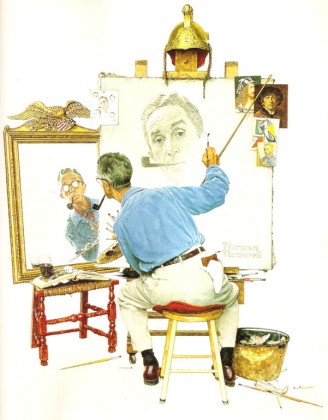 I adore the way Rockwell, a well-known American illustrator, pokes fun at the process of creating one’s own portrait. Did you notice that he’s holding a paintbrush, yet his work-in-progress resembles a drawing? Or the references to other famous portraits? Or the beverage precariously-placed on the open book? 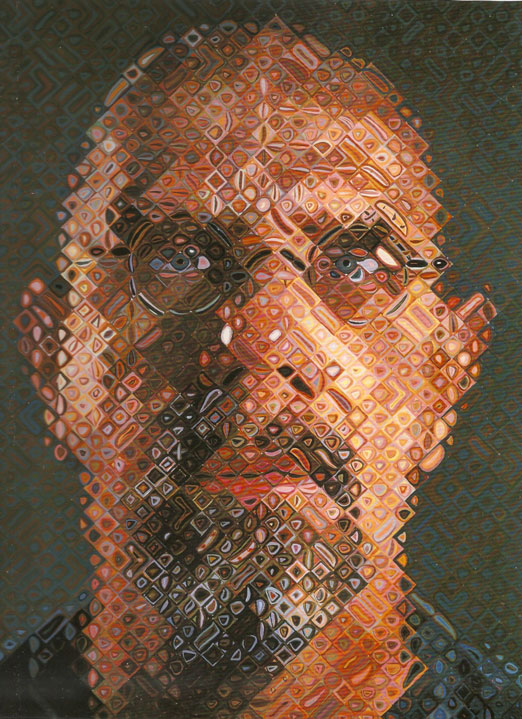 An artist still alive(!) and renowned for his self-portraits is Chuck Close. In an interview by Sandy Nairne for Self Portrait: Renaissance to Contemporary (authored by Anthony Bond and Joanna Woodall), Close admits to using himself as model just because he was available, and that he was inspired by Jonathan Swift’s Gulliver’s Travels to make them extra-large in size. “…the idea of Lilliputians crawling over the head of a giant and not even knowing what they were on, stumbling over a beard here and falling through a nostril.” When you see his work in person, it’s amazing to see their scale, and easier to interact with them, experimenting with the relationship between viewing distance and abstraction. (Currently an exhibition of his work is showing at the Museum of Contemporary Art in Sydney, Australia through March 15, 2015.)

I hope seeing these Famous Faces inspires you to try drawing your own portrait. For more help, also check out How to Draw Your Face and 5 Ways to Draw a Selfie. We’d be so honored if you shared your work with us by submitting to Selfies before March 31, 2015.